Lessons From A Runaway Bus 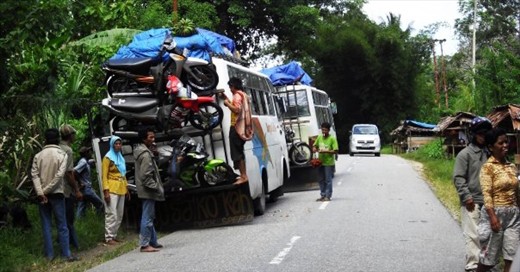 I have traveled to many third world countries and can honestly say that each one was a real eye-opener for me. One of my trips took me to Indonesia where I back-packed around for awhile. I got around by either hiring a motorbike where I could, or getting a bus between towns.

On one of my bus trips we needed to go over some mountains to get to our final destination. Let me set the scene for you. The roads were extremely narrow, busy and rough, while being cluttered with carts, animals, bikes and just about anything else that would fit on the road.

As we got further up in the mountains, the roads seemed to get even narrower, and the bus which of course was very old and had mostly open windows for ventilation appeared to be laboring us it climbed the steep inclines.

Anyway, it was all fine until we started going down the other side of the mountain. Then it became like one of those crazy roller coaster rides you go on at Disneyland, where there is just one speed – fast. I was sitting down the back of the bus which made everything seem so much rougher.

All I can remember now is looking down from my window seat over the side of the mountain which seemed inches away and the driver didn’t appear to be even trying to slow down at corners as we were hurled from one side of our seat to the other as we drifted around bends.

On one level it was quite comical as the sea of heads in front of me were literally being tossed around like a salad in a bowl. The heat, the dust, and the feeling that we were all about to die didn’t help to comfort me at all.

This seemed to go on for hours, although in reality is was probably more like 30 minutes. But as I pondered if I was going to live through this or end up in a pile of burnt scrap metal at the bottom of the mountain, here’s what I learned:

1. Don’t put off until tomorrow what you can do today.

Here’s my big lesson on goals. Make sure you complete at least one goal that’s important to you every day. Don’t make your goals so big and unrealistic that they can never be reached. Instead, make them micro-goals and just achieve one per day.

My goal for the day while on the bus was to stay as calm as possible instead of giving into my fear which wanted me to totally freak out and go into panic mode. My micro-goal was to be conscious of my breathing and do slow, deep breathing to remain calm.

2. Make sure that you have left nothing unresolved at the end of each day.

As we slid around corners and came perilously close to having head on collisions with other vehicles racing up the narrow mountain roads it dawned on me that if I were to die today, was there anything that I would leave behind that was unfinished.

As I thought about it, I realized that I had never gotten into the habit of leaving ‘loose ends’ either personally or professionally, so everything was good in that respect. Since that day, it has been even more of a conscious decision to make sure that I never end any day with anything left undone that could have been done.

This especially includes making sure that all your relationships are in good standing at the end of each day. There’s no time to hang onto past grievances when it’s so easy to forgive and forget, and move forward in joy.

3. Do your best to live fully in the present moment as it is a rich and full place to be in.

As terrifying as it was at times, the intensity of each moment in the bus was incredibly rich and full. There was literally no time to think about anything else except to do my best to flow with the jerky movements of the bus as it went from side to side.

It’s the same with life. The more we can flow with what is going on right now, rather than be distracted by a million and one things that are on our ‘to-do’ list, the more alive we will feel and become. besides, distractions inevitably lead to ‘accidents’ and most of the time they are not enjoyable.

4. Control is an illusion.

The hardest part for me was that I couldn’t control the bus. I knew that if I had of been driving, then I would have felt better. The fact is though, when are we ever really in control of anything. Sure, we can control what we say or do, but that’s about it.

There are a million and one things that go on around us every day that are completely out of our control, and yet somehow we still manage to survive. The plane I flew to Indonesia in was not in my control. The food I eat when I am out, is not in my control – it could be riddled with bacteria for all I know.

Each and every day I see people struggling to control themselves or others, when there’s no real need. That’s why every chance you get, stop trying to control things that are none of your business and let it go. The moment you just let go, then you open up to deeper levels of trust and joy in life.

5. Why I always have an attitude of gratitude.

When the bus finally arrived at it’s destination, I was absolutely exhausted and relieved at the same time. However, the first thing I did after I got off the bus and collected my luggage, was to go and thank the driver for getting us to our destination safely.

Even though I thought that he was a reckless driver and had put us all at risk, the fact was that from his perspective it was probably just business as usual and that the day’s drive was normal.

From that day on, no matter how much I may have judged something to be ‘unacceptable’, I have always found a way to be grateful for whatever lesson I may have gained from the experience. I call this having an ‘attitude of gratitude‘ towards life.

The funny thing is that life keeps sending me more things to be grateful for – don’t you love how that works!